Uberrime, (Uber-ree-may) Latin for luxury, abundance, and or fruitfully copious. Marco began Uberrime indirectly in 2015 when he moved all of his workshop tools and creative materials into a tiny office space, cordoned off into different labs where each corner is used to make different things. Asking a lifelong friend what he could make her for Christmas, thinking a nice hand carved clock or something elegant, she replied bluntly, and in all seriousness, "A Dildo." It took him all of two seconds to reply that he could in fact make her one. After a month of trial and error, her gift arrived just before Christmas. The feedback was immediate, "You should sell these!" Indeed.

"If you are looking for a wearable vaginal plug, something for use outside your house, then Sensi will stay in place with more supportive pants, like not-baggy jeans. A pair of tight spandex shorts keeps it in place for me (under a second, loose pair of running shorts) while I go out to exercise. That's because…

I keep taking Sensi along on bike rides. You see, I was sitting with the Uberrime Sensi vaginal plug inside me while I was working once. (Something I do with a lot of toys.) Anyway, I stopped being able to feel Sensi after a while, so I figured: Why not take it somewhere bouncier?

A 1897 ad promotes a bicycle saddle that "insures…a graceful attitude" by "entirely relieving the sensitive parts of the body from pressure of any kind."?

That was 125 years ago, but still: I said, "Fuck the patriarchy," bike-rode all over with my vaginal plug inside, and then came home and masturbated some more. Hell yeah.

When I'm really pedaling and bobbing up and down, Sensi adds a boost to my biking. Once I even came while squeezing around Sensi and flying down a hill. I find myself exercising about 25% longer—literally, going the extra mile—with Sensi's soft silicone inside me. If you're a bit of an exhibitionist like me, then wearing this plug discreetly can help fulfill that desire for public play.

Is Sensi the most orgasmic toy I own, by itself? No. The ridge is large, but the silicone is so squishy that just holding it in place doesn't provide G-spot impact.2 It's a soft touch, basically; like a whisper against my G-spot, versus the SHOUTING of the Njoy Pure Wand.

Sensi is for clenching around, pure and simple. It's a great addition to other forms of play, like using a good bullet vibe."

"First of all, I would not recommend this toy for overall orgasmic bliss to those looking for a crazy ride. It's a shortie coming in at 5 inches an 4.5 insertable, a small tapered head and second bump that acts as a plug, both filling you and ensuring comfort as it sits within you. This toy is not for deep penetration and thrusting, instead, I found it to be comfortable for long-term wear, a mind blowing thing for me as I'm not a huge fan of anal and don't normally find toys that I can substitute for a plug without inserting anally. This means the toy is actually perfect to work on kegels as you are holding it within you, gently squeezing and clenching around the silky soft silicone. This was an entirely new concept for me in regards to vaginal toys and I found myself loving it far more than I had anticipated.

For the FULL review and specs, watch the video!"

The Sensi has a nice short base which makes it ideal as a vaginal plug because it leaves the butt and clit free for other stimulation.

So why would someone want a vaginal plug? The Sensi would be great for any of these things:

Material:
Silicone
Body Safe:
Phthalate-free - Non-porous
Care & Cleaning:
Hypoallergenic, hygienic, and durable, silicone can be cleaned with soap and water. Toys without electrical components can be cleaned by boiling for 3 minutes or on the top rack of your dishwasher - no detergent. Do not use with silicone lubricants.
Measurements:
Head and Mid-Shaft: 1.6 Inches Diameter, Insertable Length: 4.5 Inches, Total Length: 5 Inches
Approximate Length - Insertable:
4.5 inches
Approximate Width - Widest Point:
1.5 inches
Size Reference: 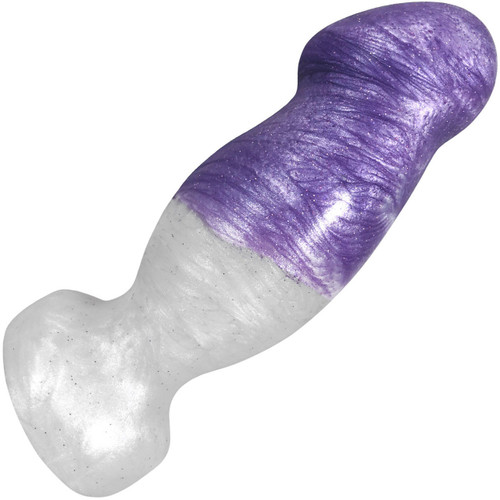