The Magic Wand Rechargeable offers you another way to enjoy the Magic Wand - liberated from the cord. The Magic Wand Rechargeable features 4 levels of power intensity, 4 patterns of vibration and a silicone head. This cordless version adds the convenience of a plug-and-play feature - if the unit was not charged after the last use, you can just plug it in and enjoy your Magic Wand without having to wait for the unit to charge! For use in North America only. Not intended for international use. All purchases outside of North America will not be covered by the warranty. Warranty is handled (domestic purchases) directly through manufacturer.

The Magic Wand has been trusted for over 30 years to provide powerful penetrating vibrations. Now, liberated from its cord, it is ready to offer soothing, stimulating massage nearly anywhere, anytime. Powerful, durable, satisfying and now, cordless.

"I used to love the fact that the original Magic Wand plugs in – no batteries, no power loss, no wait. But the cord is short and eventually I've grown to hate cords. They get in the way, they tether you to the nearest electrical outlet. So the fact that the Rechargeable Magic Wand is, well, rechargeable is a big plus in my book. Not only is it rechargeable but a charge lasts forever and you can still use it while it's plugged in and being recharged – very handy for folks like me who have a bad habit of turning on 8 vibrators to find them all dead.

Another upgrade is that the head is finally SILICONE. Before I knew that the head was a porous material I used it one night when I didn't realize I was still spotting. I laid it down beside my bed, and went to sleep. The head never again was visually clean. The new head is also now a little more plush than before; in fact it reminds me of the way the Doxy head feels.

Yet another feature I didn't love about the first Magic Wand was the rocker-switch and how it went low-Off-high. You could flip past "Off" in a split second but sometimes it messed you up. Now, there is a power button plus an intensity button that cycles through 4 levels PLUS a patterns button if you like that sort of thing.

Oh and the overheating. The Original Hitachi Magic Wand got surprisingly hot – all over. I'd heard tales of people who used it for long periods of time, burning through the motor every year or two. The Rechargeable Magic Wand doesn't overheat, not even after hours of operation. Of course despite fixing this issue, they don't believe it so they set a fail switch in – it'll shut off at 20 minutes of continuous use. You can turn it right back on, though they tell you not to. It's annoying for the people who can, not only tolerate it for 25 minutes, but need it for 25 minutes. Or more. This shutting off crap is probably the only Con of the new-and-improved Magic Wand."

"I'm happy to say that the Magic Wand Rechargeable is a more than worthy successor to the original. The chief advantages of the Magic Wand for me have always been both the intense power and fine control it offers, and the Rechargeable features excellent improvements on both fronts. Its lack of a cord really does make a difference — the corded version could be pulled slightly in one direction or another by the weight of the wire, and I was always conscious of its limited range. You couldn't just put it anywhere when you were in the middle of things; not having to think about that during sex is more liberating than you might think. And trans women won't have to worry if using it takes an hour or two — it keeps a charge so well, you'll rarely have to think about the battery at all, and it can still be used while plugged in.

The controls, too, offer even more options: there's no longer a rocker switch, but instead a dedicated on/off button, a button to select one of four vibration patterns, and a button to cycle between four power options. Although the patterns haven't done much for me — navigating toward orgasm as a trans woman has meant keeping the timing of things very tightly controlled — I've found the new vibration frequency options immensely better when it comes to, well, coming.

I'd always preferred the lower 5,000 RPM setting on the legacy wand, and the Rechargeable offers modes of 2,700, 3,800, 5,400, or 6,300 RPM. I soon learned that the lowest two settings are the ones that work best for me, because it feels as if the beating, thrumming power of the vibrations increases in its strength as the frequency decreases.

It turns out these slower, deeper vibrations are just what I've always needed. The original Magic Wand had taken me pretty far, but this is the one that really went the distance."

Material:
ABS Plastic, Silicone
Body Safe:
Phthalate-free - Non-porous
Care & Cleaning:
Clean with a wet cloth and mild soap. Optionally, use gentle antibacterial toy cleaner. Do not submerge and do not run under water. Do not use around running water at all. We recommend water-based lubricants.
Warranty Information:
MagicWandOriginal.com
Power Source:
Rechargeable
Volume - Buzz: 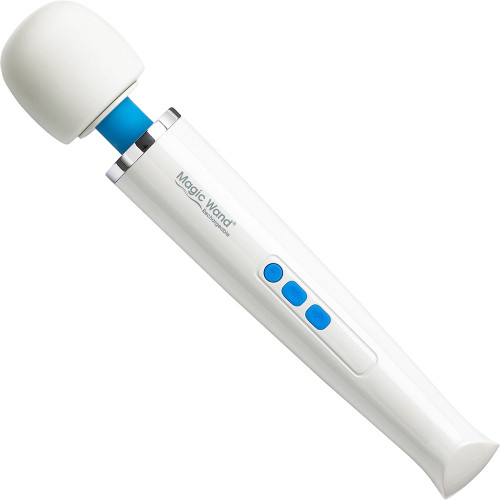