Magic Wand Massager For Women - Therapist-recommended
Since the 1970s, millions of folks of all ages have found that while the Magic Wand® Massager works great for running up and down a sore back, it is also an amazing tool as an intimate massager. Despite its everyday appearance, which can be an advantage, and lack of bunny ears, this is the market-leading massager lovingly referred to as the Cadillac of vibrators! It is so powerful, in fact, that the low setting is enough for most people, and many people recommend using it with a comforter or towel between them and the Magic Wand massager. For use in North America only. Not intended for international use. All purchases outside of North America will not be covered by the warranty. Warranty is handled (domestic purchases) directly through manufacturer.

Many trusted intimate-health therapists and other advisers recommend the Magic Wand massager to women. Here is what they are saying:

Although imitated by many, the Magic Wand massager is the only true original, with unmatched power and rave reviews. Choose the massager that will leave you truly satisfied, time after time, year after year.

Time Magazine's "The 50 Most Influential Gadgets of All Time"

"A few years after a 2002 episode of Sex and the City revealed the electric neck massager’s cultish adoption as a vibrator, Hitachi dropped its brand from the device. But only in name: the Magic Wand - in service since the late-1960s - likely remains the best-known product stateside made by the $33.5 billion Japanese company. (Hitachi makes everything from aircraft engines to defense equipment, but perhaps nothing as personally stimulating.) Though sex therapists and fans have extolled the Wand’s virtues by analogizing it to cars (the Cadillac, the Rolls Royce), it more closely resembles a microphone, with a white plastic shaft - the wand - and a vibrating head - presumably, the magic." - Time Magazine

Massage for wellness and pleasure
Receiving massage is not only a matter of pleasure; it's a wellness enhancer that is hard to beat. It helps the body relax, which in turn has positive effects on our emotions and thoughts, and creates an overall sense of well-being. It also relieves pressure and loosens tense muscles, which increases blood flow to the cells. This may help improve function throughout the body.

There are many specific uses of massage. Some people use massage to help relieve back pain, while for others it is more about an overall sensation of well-being and pleasure. Among athletes, massage is used to help prevent injury and speed recovery, by easing inflammation and speeding cell repair. Others believe massage can help ease anxiety, improve sleep, alleviate headaches or even boost immunity. No matter which of these benefits you hope to gain, the Magic Wand® massager can take you towards them.

For over 30 years, the Magic Wand massager has been America's trusted choice for an all-round personal massager that delivers pleasure and satisfaction, time after time. Its power and durability has earned it rave reviews from users.

The latest-generation Magic Wand® is stronger than ever.
The Hitachi Magic Wand® was one of those rare products that defied the odds. It's been around for decades, with few visible changes to its workhorse appearance, yet it remains an undisputed best seller. Men and women who own one give it rave reviews: 5 stars, capital letters and exclamation points – and they typically buy a new one if their old one ever dies, usually after years of trusted service.

The Hitachi Magic Wand, today known simply as the Magic Wand is stronger than ever. It is solid and durable, providing years of powerful, satisfying vibrations, and it comes with a 1-year warranty. There's a reason it's America's trusted choice for a personal massager.

Many have tried to imitate the Hitachi Magic Wand, and most have failed. There is only one original. Don't settle for something cheap and weak that doesn't last – get the strong, deep vibrations of the Magic Wand massager, and satisfaction that lasts for years to come.

Magic Wand Massager Information
The Magic Wand is an electrical personal massager that provides deep, strong vibrations for a satisfying massage. Rather than batteries, it uses power via an electrical plug – part of what makes it so powerful. It never runs out of power and is always ready to go! The Magic Wand massager is designed for a United States 110-120V/60A power source, and is not safe to use with any other power source or adapter. It is available for sale in the US and Canada.

The Magic Wand creates firm, powerful massaging vibrations through its firm, smooth, tennis-ball size head. It has two satisfying frequencies: I) 5,000 and II) 6,000 vibrations per minute. The Magic Wand massager is approximately 12 inches long, and about 2 1/4 inches wide across its vibrating head. It weighs in at a sturdy 1.2 pounds – a powerful and reliable workhorse that is by no means a lightweight!

For safety, never handle the Magic Wand massager by the cord, and never immerse it in water, or use it in the bath or shower. Also, do not operate it for more than 25 minutes, without switching it off to cool down for 30 minutes before switching it back on. Please see the user's manual for complete instructions and safety warnings.

The Magic Wand massager comes with a 1-year quality warranty.

IMPORTANT: Any individual who may be pregnant, has a pacemaker, suffers from diabetes, phlebitis, and / or thrombosis, is at an increased risk of developing blood clots due to recent surgery, or who has pins / screws or other medical devices in their body should consult with a physician before using a massaging device designed for home use. This product is intended for use in North America. Customers using a convertor to operate this item outside of North America assume all risk. Use of a converter and any resulting defect will void the manufacturer warranty and such claims will not be honored.

"In terms of size and strength, I think it's safe to say that nothing can beat this. This thing is powerful. Like… if Wonder Woman wanted some sexy-time, I'd imagine this would be her weapon of choice… The handle provides a good grip, and there's no real risk of having it slip out of your hand. It's very easy to control and switch between the modes. My favorite part of about this is that the handle doesn't absorb the vibrations – because the handle and the head are separated by a flexible neck, the vibrations are concentrated at the head. Nothing's more annoying than feeling your whole hand absorb the vibrations when trying to press a toy up against your clit!"

Material:
ABS Plastic, TPR
Body Safe:
Phthalate-free - Porous
Care & Cleaning:
Clean with a wet cloth and mild soap. Optionally, use gentle antibacterial toy cleaner. Do not submerge and do not run under water. Do not use around running water at all. We recommend water-based lubricants.
Warranty Information:
MagicWandOriginal.com
Power Source:
Corded Plug-In
Volume - Buzz: 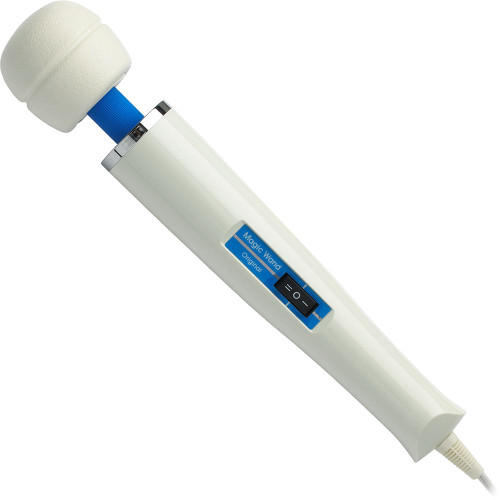 Under the Bed Restraint System By Sportsheets