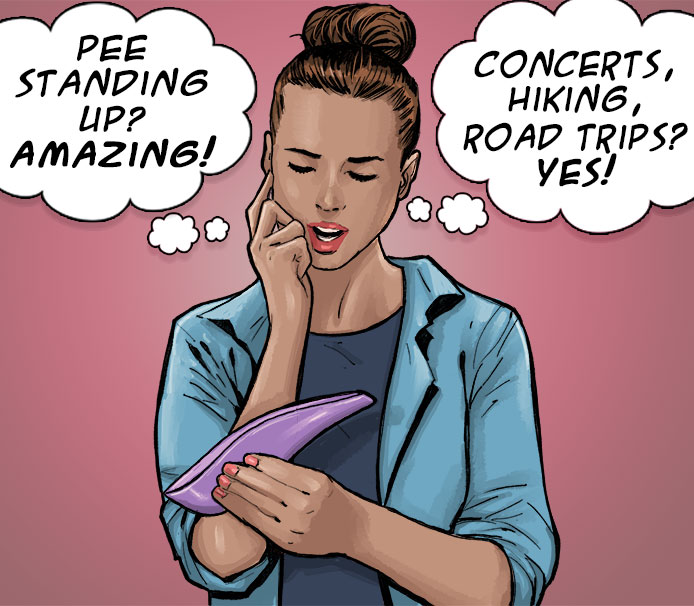 Freud’s theory on penis envy is questionable as a significant stage in sexual development, but who among us hasn’t imagined what it would be like to pee standing up? While it may not be a source of anxiety for most cis women, the idea of having a penis just seems a lot more convenient when you think about it. Having a vagina can be very limiting at the most desperate of times. Fortunately, STP (stand-to-pee) devices make life a little easier for those of us without a penis.

STP devices are all designed differently, but they have the same basic idea. They act as a funnel for urine by cupping the device around the labia and channeling it away from the body. These devices are primarily used in situations where someone with a vagina can tuck it in their pants and avoid having to remove any clothing. It’s important to create a tight seal when using an STP device to avoid any leaks. These devices definitely take some getting used to, so don’t get discouraged if they seem awkward at first.

With any STP device, I recommend testing it out a number of times before relying on it out in public. The first time you use it, try it out unclothed in the shower. Once you’re able to do that, try using it without clothes in front of the toilet. Then, try it while clothed. Don’t get discouraged if it takes a number of tries to get it right.

STP devices are primarily used in the trans community because they provide an important part of gender expression for some people. However, I want to make it clear that these products can be used by anyone who finds them useful and normalizing them would be beneficial for many reasons. Here are five major applications for STP devices:

While STP devices have several practical uses that aren’t related to gender expression, it is a very important use for these products. Some trans masculine folks rely on STPs for gender affirmation either at home or in public restrooms. For many trans masculine people, an STP device is a tool to help them feel safe in men’s restrooms, as they allow people with vaginas to use urinals. This can help a lot with dysphoria in some folks.

I’m addition, non-binary individuals and those who may be questioning their gender may also be drawn to these products for gender expression. Trans men are not the only people who can find these products useful for combating dysphoria or feeling safe in the public restroom of their choice.

STP devices have kinky applications for those who wish to explore watersports. Watersports (AKA “piss play” or “golden showers”) is a kink that involves urinating on a consenting partner. It can be done in a shower or tub for easy cleanup, but sometimes tight bathrooms make aiming difficult for people with vaginas. An STP device could be used in this case to help the top party aim their stream at the intended target and avoid unwanted messes or awkward positions.

The most common use of STP devices for people who aren’t necessarily using them for gender expression is convenience when there are bathroom or clothing restrictions. STPs are perfect for long road trips, camping, festivals, or occupations with limited bathroom access.

In addition, STP devices can be used for folks with clothing restrictions including jumpsuits, corsets, or bulky gowns. In these cases, sitting to use the bathroom can be difficult or impractical when an STP device can be used instead.

Rumor has it the Sam STP by New York Toy Collective can be used to create a tight seal around the vulva and used as an oral sex aid. Sucking on the hole will create suction and stimulate the genitals of the wearer. I own a dildo specifically for this reason (which isn’t an STP) so it’s absolutely possible, but you’ll need an STP device that doubles as a packer for this to work. Something like the PStyle obviously won’t be the same. Another option to try here is the hollow STP packer by Cal Exotics, which is a really affordable option.

STP devices also have some practical medical uses, including helping those with mobility issues relieve themselves. They are also useful devices for some people during pregnancy as well as plus size folks. It makes urine samples at doctors’ offices a lot less awkward. You can even buy a carrying case for your PStyle so transporting it is discreet. Alternatively, you can carry it in a purse or a deep pocket (not the best fit in the bullshit pockets in most women’s jeans, though).