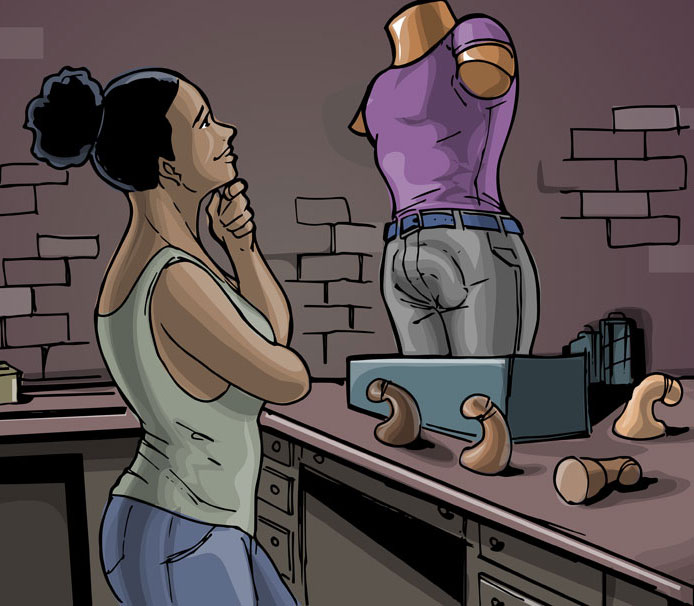 Before we get into the hows and whys of packing, let’s define what packing is. In this context, packing refers to the practice of somebody who doesn’t have a penis wearing padding or an object in their clothing, in order to give the appearance of having a bulge. Some people use the terminology ‘soft packing’ to refer to packing with anything that can’t - or isn’t intended - to be used for penetrative sex, in opposition to ‘packing hard’, which involves packing with a toy or object that’s also intended for penetration. In practice, however, people often use ‘packing’ and ‘soft packing’ to mean the same thing.

Packing is a practice with a long history, although until recently there were relatively few commercial products available, with some people using rolled up socks or hair-gel filled condoms. Now, however, there plenty of specifically made commercial options to choose from.

Why Do People Pack?

For transmasculine people, one of the more commonly cited reasons for packing is to alleviate dysphoria. For people with bottom dysphoria, having a bulge or weight in their pants can be a big relief. Related to this is the issue of safety. In most situations in daily life, people aren’t paying too much attention to each other’s crotches, but there are still situations and environments where being out or outed as trans is or feels like a safety risk. In some circumstances (think locker rooms) packing can help reduce this risk and/or alleviate some of the anxiety that comes from navigating a transphobic world as a trans person.

That’s not to say that every person who packs is transmasculine, or that every transmasculine person enjoys packing. There are plenty of non-transmasculine non-binary people, women (both cis and trans), and even some cis men who pack. Some people find packing to be a confidence booster by making them feel like they walk with a little more swagger, some cis men who’ve lost their penises in accidents say it makes them feel more comfortable in their bodies, some people find it helps them fill out clothes made for cis men better, and some people just enjoy it because it feels sexy to them. There is no ‘wrong’ reason to pack, and no ‘wrong kind of person’ for packing.

Out of the packers commercially available, there are three general subtypes: soft packers, STP packers/devices, and pack-and-play packers.

Soft Packers are, as the name suggests, meant to resemble a flaccid penis. While some people do use their soft packers for sex, (both penetrative and non-penetrative), soft packers aren’t designed for this. There are a variety of different form options available, from non-representational to fantasy to realistic, but they are usually phallic.

The STP in STP packers or STP devices is short for ‘stand to pee’, and this style of packer does exactly what the name suggests; they function as a funnel that helps their wearer pee standing up. For some people this might be primarily dysphoria related, although others use them for practical or kink reasons. STPs and STP packers tend to be firmer than soft packers, as they need to ensure the ‘cup’ doesn’t collapse when their wearer is using them. For this reason, they can feel a little more awkward to pack with. There are non-phallic STP devices like the pStyle 2, although more phallic options like the New York Toy Collective Sam STP can be easier to pack with.

Generally, there are two materials that packers tend to be made from - silicone and thermoplastic rubber/elastomer (TPR/TPE).

TPR/TPE packers, like the Packer Gear Packing Penis or Doc Johnson Pack It Lite, are sometimes sold under branded names like ‘Cyberskin’. Usually cheaper than silicone options, they also tend to be more squeezable and lighter than silicone packers, adding to their realism. Their surfaces do get sticky, so after washing, a cornstarch or renewal powder needs to be applied. Additionally, they can ‘sweat’ the oil used in their manufacturing process, which can cause skin irritation from direct contact for some people, although wearing a layer of fabric to separate it from skin alleviates this. TPR and TPE are porous materials, so while it’s alright to use them for soft packers, they’re not suitable for pack-and-play toys or STPs, as they can’t be fully sanitized. They also tear more easily than silicone packers.

Silicone is a very stable material, and packers made from it are non-porous. This means that they can be fully sanitized, making silicone an ideal choice for pack-and-play toys like the New York Toy Collective Shilo, or STP devices like the Packer Gear Ultra-Soft Silicone STP. However, silicone packers can be a little more expensive than TPE/TPR packers. There are still affordable options like the Packer Gear Silicone Packing Penis and silicone, as a material, can be firmer than realistic.

The most important accessory for packing, no matter what kind of packer you choose, is a harness. While some packers can be stuck to the skin with medical adhesive and some people choose to ‘free pack’, most people who pack choose to use a harness. There are, broadly speaking, four kinds of packing harness to choose from: packing straps, packing socks, packing underwear, and traditional strap-on harnesses. All have their own benefits and drawbacks.

Packing Straps are the most minimal of the harness options, sometimes only consisting of a waistband and a holster for the packer, although they’re often in ‘jock strap’-esque styles. They take some of the guesswork out of positioning a packer and allow you to wear whatever kind of underwear you’d like on top. While some packing straps are intended for particular packers, like the Aslan Mr Right Packing Strap, most are generic so long as the diameter of the O-ring or opening is the same size as your packer. Straps that leave the shaft of a packer exposed and have the option to have packers directly against the skin, like the

SpareParts Pete Commando Packing Underwear or Packer Gear Jock Strap, are ideal for use with an STP. However, packing straps aren’t ideal for pack-and-play devices, as they don’t keep toys as secure as conventional strap-on harnesses.

Packing Socks are fabric holders for packers and are called so because people used - and sometimes still use - literal socks for this purpose, although commercial versions do now exist. Essentially, the sock acts as a little bag for the packer and is then attached to the waistband of non-packing underwear using a safety pin or magnet. Packing socks give the same freedom in underwear choice that packing straps do, although they don’t aid in correct placement in the same way.

Packing Underwear is, as the name suggests, packing underwear that also serves as underwear in its own right. A variety of styles exist. While brief and trunk styles are most common, there are also more feminine options available. There is some crossover between packing underwear and underwear-style strap-on harnesses, meaning they can be a really good choice for those looking to wear a pack-and-play. However, if you’re somebody who intends to pack regularly, replacing your underwear drawer entirely with specialist packing underwear can get expensive.

Finally, conventional strap-on harnesses can also be used for packing. While they’re not specifically designed for wearing under clothes and can feel bulky, they may be something you already own. For people who pack because it feels sexy, the bulk of a strap-on harness may be a bonus rather than a drawback. And they’re also a good option for pack-and-plays, as they’re designed to hold toys in place even during vigorous thrusting.

How To Choose A Packer

Choosing a packer, especially if it’s one you want to pack with daily, can be a really personal decision, and there’s no perfect packer for everybody. There are an almost infinite number of factors at play, and they vary by person, but the three broad categories are function, size, and form.

Size is also self-explanatory but might take a bit more consideration. If you’re interested in packing for passing or dysphoria reasons, it’s worth considering what size is proportional to you and remembering that the average-sized flaccid penis is around 3.61 inches in length. Body type also plays a role here. Both packer and standard issue penis bulges tend to be more noticeable on skinnier bodies, so if you’re plus sized and packing for dysphoria or confidence, you may want to choose a larger packer. Transmasculine people who intend on having phalloplasty down the line often get advised to ‘pack big’, as the average post-phallo penis length is between 5–8 inches even non-erect, and this gives somebody the time to get used to and comfortable with having a large penis day-to-day.

How To Pack For The First Time

Ok, so you’ve got your packer and harness. What now?

I always suggest having a test run with a packer before wearing it outside, especially if you’re new to packing in general. Wearing a packer can feel really odd to begin with and can stir up some complicated gender feelings for some people, so having a safe and comfortable space to try it out can be invaluable! This also gives you an opportunity to see how the packer you’ve chosen moves with your body, don’t be afraid to jump and move around to see how it feels. Some people tend to sit their packer too high when first starting out. A good rule of thumb is that the base of the packer’s shaft should sit on top of the base of the clitoris.

Getting used to an STP is pretty similar to soft or pack-and-play packing, with some additions. Learning to pee standing up can take some practice and it make time to instinctively know where to place the ‘cup’ of an STP, even if you have experience with other STPs. My advice is to first practice standing to pee naked in the shower, as this allows you to clean up any spillage and yourself quickly, without the risk of catching any clothes in the crossfire. Once you’re reasonably confident, move on to practicing with your toilet at home (but still naked) and then your toilet at home with clothes on before taking your STP out into the wide world.