The Fun Factory COBRA LIBRE II in Black On Black is the sex toy made for the head of the penis! This massager surrounds the tip of the penis with its soft, velvety interior made of medical-grade silicone. From gentle to powerful, the two motors deliver thrilling vibrations to the most sensitive part of the penis, the head. COBRA LIBRE II doesn't need to be moved back and forth by hand - so you can just concentrate on breathtaking sensations and enjoy the ecstasy! COBRA LIBRE II is easy to clean under running water with a little bit of toy cleaner or mild soap.

The COBRA LIBRE II is an updated version of the FUN FACTORY classic COBRA LIBRE. With a new control unit that's now even easier to use, and thanks to the key lock and quick switch-off features it is more convenient than ever! Press FUN to play!

The COBRA LIBRE II is an innovative update to the "first of its kind" penis stimulator. An ergonomic shape and silicone interior envelop the penis with a superior, snug fit. Two powerful motors release pulsing vibrations just underneath the glans providing targeted stimulation. This state of the art toy comes with a stylishly lit slide touch control pad which offers a wide range of vibrating options.

The COBRA LIBRE II also features overlapping effects which occur when both motors run at approximately the same revolutions. The overlapping carries over into the vibrations creating a rhythmic pulsing. Waterproof and easy to clean, this gotta have it toy incorporates Click N Charge technology making it environmentally friendly. Note: this toy is designed to stimulate the head and top of the penis only.

With its 11 vibration patterns, the COBRA LIBRE II heads confidently for the next climax – and is always ready to please from the sensitive to the demanding.

Using the newly designed control panel with touch buttons, both of the powerful motors in the COBRA LIBRE II can be navigated from gentle waves to ecstatic speeds. Finely tuned programs and intensities even make the most discerning people feel like they are taking the fastest ride of their lives. With the handy control unit that now goes underwater and with a practical key lock for adventures that can travel with you! With its futuristic design, it's no accident that the COBRA LIBRE II really catches the eye. Thanks to its sporty-ergonomic shape, the COBRA LIBRE II is easy so handle.

COBRA LIBRE II – FREE LOVE
The toy can be applied over the erect penis upright. The glans is exposed through the so-called "crowding out" effect caused by the interior shape of the toy.

Moving COBRA LIBRE II back and forth manually is not necessary because the two powerful motors pulse, creating overlapping vibrations and delivering spot-on stimulation just below the sensitive glans!

All FUN FACTORY toys are invented, developed, designed AND produced in Bremen, Germany.

FUN FACTORY offers a diverse and colorful spectrum of toys all made with 100 % medical-grade silicone!

Carefully clean the toy before first use and after each use with warm water and a mild soap. A few drops of lubricant ensure a pleasant feeling when inserting the penis into the toy. FUN FACTORY recommends a water-based lubricant.

"Overall Opinion Of The Cobra Libre II: 9.7 - All things considered, I think the Cobra Libre 2 is worth a look if you’ve got the money and want a damn fine looking product. It’ll cost you $129.99 through Shevibe and you can grab it in Red and Black or Black on Black… It’s like a sports car for your cock! So, if your cock is having a midlife crisis and you need to buy a sports car but can’t afford that Porsche or new Corvette Z71 (drool...), get a sex toy.

Have orgasms. Be happy, be healthy. Liberate the snake, good folks. (I hope someone gets that, if not I’m done.)" 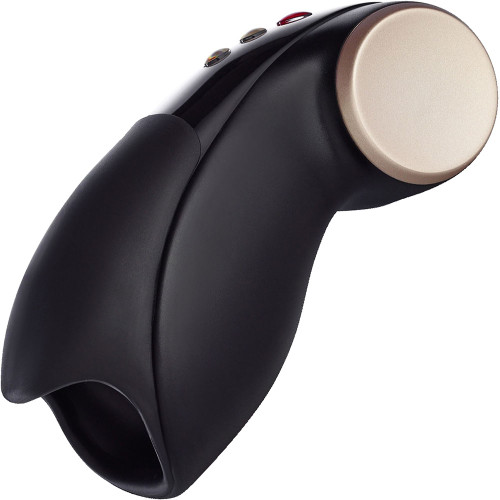