Tantus Dual Density O2 line delivers maximum satisfaction through a realistically familiar feel. The SuperSoft outside and the hard muscle core are both made of Tantus own unique blend of 100% Ultra-Premium Silicone. Flurry O2 is available in Candy, Twilight and Ice and features a bulked up base perfect for harness play.

I am super excited to write this review because, up until now, I haven't been all that satisfied with any Tantus product. Its not that they're not high quality. Its just that my vagina has become a Finicky Fanny (if I may borrow the English usage of the word). There's a specific shape and specific size and specific texture that it likes and then there's well.. everything else. Unfortunately, the specifics seem to change so I've become quite awful at trying to guess whether or not a dildo will do it for me. The Flurry does it for me. I love the Flurry.

Flurry is semi-realistic. The head is rounded and sculpted like a real cock but there's another ridge below it a quite pronounced ridge that I haven't seen on any actual penis I've fucked or sucked. Its a limited number but still. The shaft is pretty straight and relatively consistent in terms of girth. The base flares out flat so you can use it with a harness and there's no balls here. I'm so over balls on my sex toys. Sorry.

By the numbers, Flurry is 7″ long and has a diameter of 1.5″. Its a good length and firmly in the category of medium-sized toys. The head is slightly less girthy than the shaft and the contoured shape helps insertion but those ridges, again, are really pronounced. My pussy doesn't necessarily feel texture beyond hmm, there's something going on here but I could distinctly feel those ridges. Right on, Tantus.

Material:
Silicone
Body Safe:
Phthalate-free - Non-porous
Care & Cleaning:
Hypoallergenic, hygienic, and durable, silicone can be cleaned with soap and water. Toys without electrical components can be cleaned by boiling for 3 minutes or on the top rack of your dishwasher - no detergent. Do not use with silicone lubricants.
Warranty Information:
TantusInc.com
Measurements:
Length: 7.75", Insertable Length: 7", Girth: 5.25" at largest point, Width: 1.5" at largest point
Approximate Length - Insertable:
7 inches
Approximate Width - Widest Point:
1.5 inches
Size Reference: 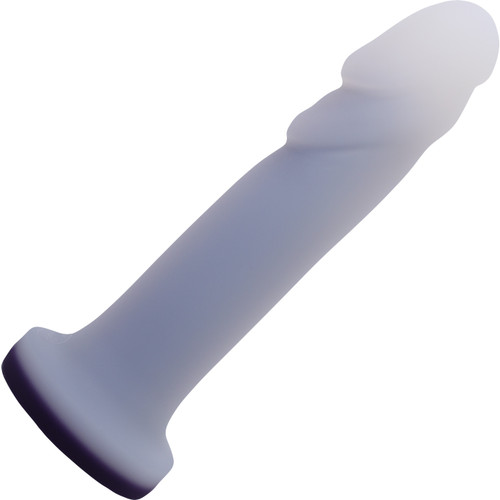