Are you looking for a more powerful stimulation than your Rabbit, a more gentle stimulation than your Wand, or simply for the best orgasmic stimulator on the market? Treat yourself to an Eroscillator Top Deluxe Soft Finger Combo - Featuring EXTRA POWER! The fun starts today! Includes the following attachments:

The body of the Eroscillator is made of ABS plastic. The attachments are made of TPR. The Ultra-Soft Finger Tip marshmallow is made of medical silicone elastomere.

"It is just about impossible not to have an orgasm with this toy. It was so good that our tester kept it for several months, and that never happens. Advanced Response Corp at the City University of New York tested this against two other well-known brands and the Eroscillator won hands down."

Smart Oscillating Engine - Potent Stimulation Without Numbing
A technological breakthrough in orgasmic response, the Eroscillators attachments are directly connected to its unique axially oscillating engine, not to the devices body like ordinary vibrators, allowing for a smart and constantly adapted dynamic response. Many women have experienced their first orgasm with the unswerving and gentle support of the Eroscillator.

Multiple Attachments - A Variety Of Blissful Experiences
Snap on various attachments in your journey towards ecstasy and discover new landscapes of bliss.

Ergonomically Designed - The Freedom To Concentrate On Your Orgasm
The Eroscillator is whisper quiet and its easily accessible power switch and snap on attachments never come between you and your orgasms. Apply the oscillating head to your clitoris and achieve great orgasms with little or no effort.

Large Range Of Power Settings - The Optimal Pleasure Intensity
With multiple power settings, the optimal stimulation intensity is but a flick of your finger away.

Reliable Power - Limitless Satisfaction
Enjoy limitless pleasure as the Eroscillator never needs recharging and never weakens while in use thanks to its battery-less design. Unlike battery operated vibrators, the Eroscillator won't wear down when it's most inconvenient.

Dr. Ruth K. Westheimer was so impressed with the Eroscillator that she made it the only sensual device she has ever endorsed. We do not offer a satisfaction guarantee, please be sure this item is right for you.

Important Note: The included Eroscillator International Step-Down Converter brings 220 volts or 120 volts down to 14 volts - the operating voltage for all Eroscillator models. If you are going to be using your Eroscillator in Europe (or anywhere a 220 volt outlet is available), you will need a Travel Adapter Plug to adapt from the U.S. plug on the Step-Down Converter to the plug style in your country of choice.

Material:
TPR, Medical Silicone Elastomere, ABS Plastic
Body Safe:
Phthalate-free - Non-porous
Care & Cleaning:
Clean with a wet cloth and mild soap. Optionally, use gentle antibacterial toy cleaner. Do not submerge and do not run under water. Do not use the Eroscillator around running water at all. We recommend water-based lubricants.
Warranty Information:
Eroscillator.com
Power Source:
Corded Plug-In
Volume - Buzz: 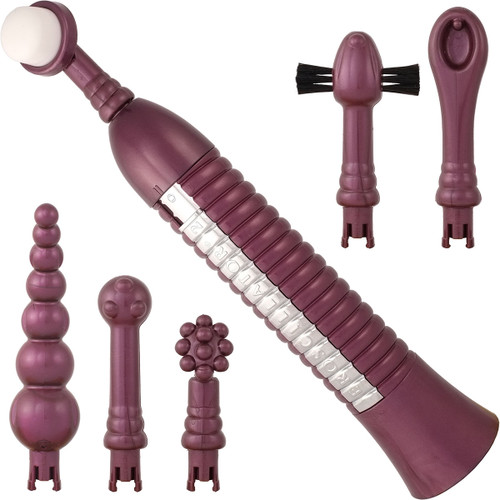