"I will admit that I am not a fan of internal vibration, so I used the vibration to warm myself up by rubbing it on my vulva and clit before penetrating myself and that motor is strong and rumbly! If you're a fan of strong rumbly motors, you'll enjoy this one.

I expected Big Shot's motor to be weak, but it's actually quite rumbly on the first speed, and has a good amount of power overall!

The biggest downside for me is that the silicone—though it has a nice, silky coating—is pretty firm. Plus the hard core makes Big Shot straight as a rod. Its look is realistic, but its firmness is not. If you like hard pressure during penetration, then Big Shot will be more your style."

While, as I said, the Big Shot has a suction cup and a vibration function as well as an ejaculation function, I initially didn't have high hopes for these. I honestly asked SheVibe to send me the Big Shot because, despite seeing ejaculating dildos marketed as ideal products for trans men, I'd never seen one actually reviewed by a trans man, and I wanted to try out the ejaculation feature specifically. But, I was really pleasantly surprised! The suction cup held well in a wet environment, if not so well against a dry headboard. And the vibrations were actually excellent. 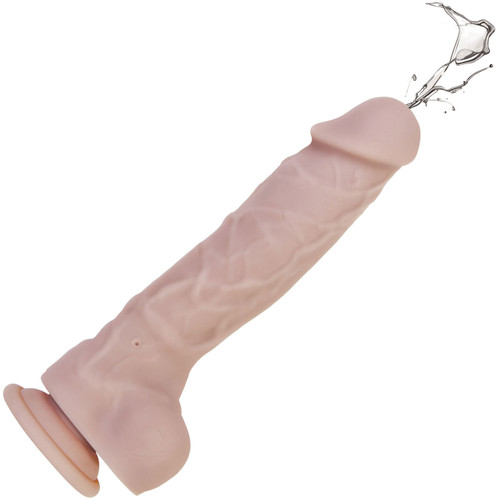