“I am NOT a size-queen. That is just not gonna happen.”

“I think you’re mistaken, I’m not the TARDIS in the family!”

If you had asked me a year, or even three months ago, if I would ever be putting Vixen’s Randy inside me, those are the responses you would have gotten. Large toys and I have never really gotten along, they usually get handed off immediately to my Little Brother for him and his Papa to review.

It all started innocently enough, with the date that led up to my Crystal Delights plug review. And then, well, as those of us in D/s dynamics are likely to do, I was an obstinate little brat via text message. Corona beer bottles were suggested, and retorts from me were made on how bottles don’t go in butts. Whomever thought it was a good idea to give me text messaging and allow me access to it within the first oh, say, 72 hours after a date? I love and hate that person right now." 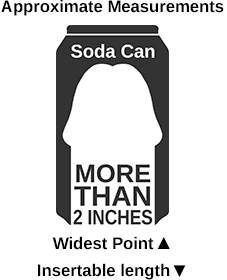