The Jellyfish 2.0 is poured in two stages. The Mermaid Blue silicone, which is also pigmented with the glow- in-the-dark powder, is poured into the head of the toy first. Intentional drips and runs are applied to the sides of the mold and a small amount is allowed to puddle in the long tentacle textures on the base of the toy. The marble of Aqua and Lavender are then poured behind to achieve the end result colors. We are very pleased with Marco’s reproduction in terms of color, a bit softer silicone and texture that isn’t as intense or sharp. 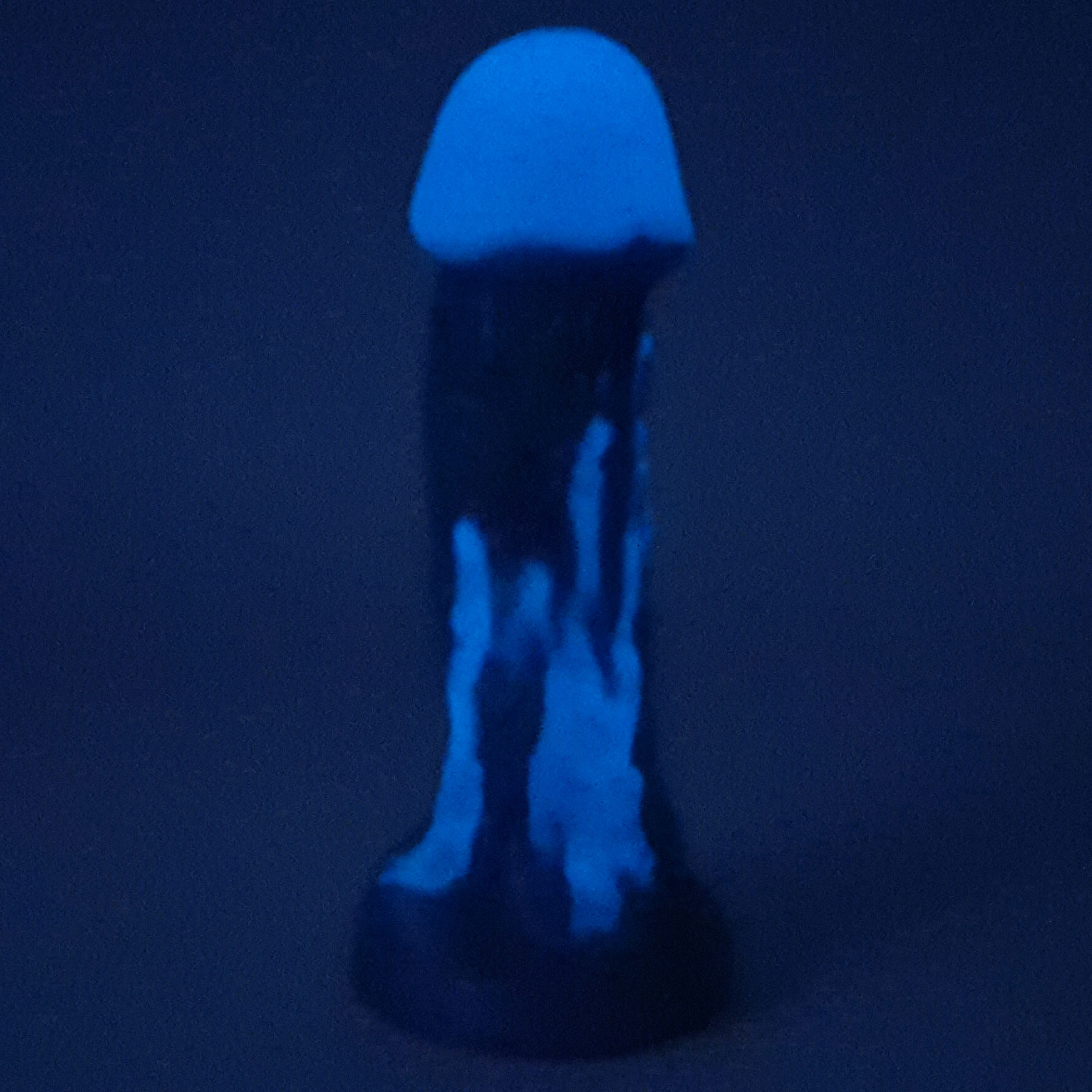 "The Jellyfish 2.0 ($77) is a mix of cheerful turquoise and lavender silicone, with a smattering of glitter and a glow-in-the-dark pigment that makes it turn into a fluorescent jellyfish when the lights go out (!!!). It’s the same size as the original, but a bit squishier and with a larger, smoother head.

The only downside to the Jellyfish 2.0: it’s challenging to quickly eject from my vagina in the midst of an orgasm, when I need to squirt. And of course I squirt, because a big head like that activates my G-spot instinctively."

"...It was this very same coronal ridge that caused me to covet this toy, and of course the texture, it’s always the texture. But most importantly, without the extreme flare at the head, the Jellyfish’s max width drops down to a measly 1.55″, which is nothing to sneeze at. But in my book is also nothing to get too worked up over, either. Honestly, it’s all a matter of taste.

Just as I’d hoped, the ultra-exaggerated head slides in with a popping sensation, spearheading the way, and parting my vaginal walls for the rest of the textured shaft. Once the Jellyfish is in all the way, I retract it just enough to align the head with my G-spot, and after that, I tend not to touch. It’s not that I don’t enjoy thrusting, back and forth, with the Jellyfish. It’s just that the head feels sublime when it’s nestled snug against my G-spot. And I don’t want to risk disturbing or dislodging it.

So instead of thrusting, I tend to rock, shoving my hips vertically up and down. Or, in other words, I grind against the toy’s bulging head, while it sits motionless within my vaginal canal. You’d be surprised how much pleasure one can glean from the textured tendrils running down the shaft via this method alone.

However, if you’re still intent on thrusting with the Jellyfish, just a word to the wise, don’t be stingy with the lube. Trust me, you’re going to want to drown your Jellyfish with your favorite lube. Yes, the 2.0 has a softer shore. And yes, it has a more refined texture than the OG, but my word of advice is that you’re still going to want to slather that puppy down with copious amounts of lube.

So what is the lesson for today, class? Everyone repeat after me: “Don’t be a Scrooge, with the lube!” You’ve be warned.

You know, it’s amazing that what was once regarded as an eccentricity in the realm of sex toys, is now rather mundane in comparison to the modern era’s near limitless offering of fantasy toys.

Nevertheless, I think Uberrime Jellyfish 2.0 is destined to become a become a huge cult classic. It’s a toy that future generations will be talking about with gleeful cries of wonderment and awe. And I’ll be one of the lucky ones that will say, “You know what? I’ve got one of the those around here somewhere, want to see it?’"

"From the moment of insertion, there’s some oomph because the head is so blunt. It finds my g-spot with very little effort from me so that’s a bonus. Twisting as I thrust lets me feel all of those lovely textures, but the star of the show for me is the coronal ridge. Just whipping it over and over my pubic bone for tens of minutes feels fucking glorious. No matter how fast or slow I go I can feel it, it’s relentless. Sometimes I keep going even after it gets uncomfortable cos I know that when I finally add a bit of clit stim and let myself go I’m gonna come so hard I’ll be a floppy mess afterwards.

Something else I love that isn’t part of but rather caused by the Uberrime Jellyfish is the noises that come from down below while I play. There’s a bubbly, squishy wet sound that comes from the parts of the shaft that don’t touch any skin on the way in and out thanks to little pockets of air that shift lube and other fluids around, making them squelch and pop. I’m more into sounds than I am into visuals so this strange noise is right up my street.

But if you’re into watching you’re gonna love the glow in the dark aspect. I have watched me fuck me with the jellyfish a few times now and I gotta say it’s fucking hot. Shadows on my skin, glistening lube on the shaft, and the eerie light that makes my love-cave glow (*chuckles* bad erotica alert!) is all a feast for the eyes. If you’ve got someone playing with you who happens to be down at the business end, they’re in for a treat, too.

Material:
Silicone
Body Safe:
Phthalate-free - Non-porous
Care & Cleaning:
Hypoallergenic, hygienic, and durable, silicone can be cleaned with soap and water. Toys without electrical components can be cleaned by boiling for 3 minutes or on the top rack of your dishwasher - no detergent. Do not use with silicone lubricants.
Measurements:
Total length: 6.5", Head circumference: 6", diameter: 1.91", Shaft circumference: 4.87", diameter: 1.55" at the widest point, Insertable length: 5.5"
Approximate Length - Insertable:
5.5 inches
Approximate Width - Widest Point:
1.5 inches
Size Reference: 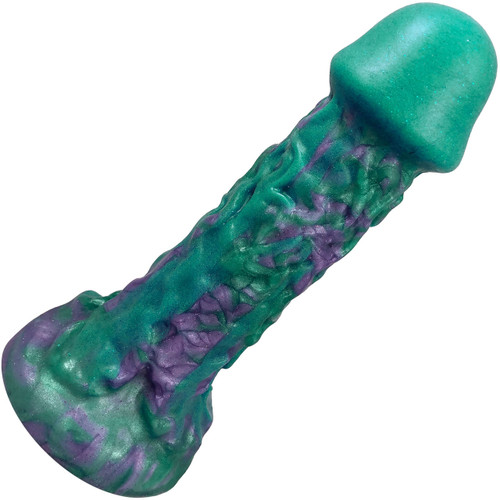