All prices are in GBP

Aneros products are hands-free, internationally patented devices specifically designed for prostate stimulation. Using no batteries or electronically induced vibrations, our products transform the body's own energy into amazing sensations. The mechanism is simple, but extremely effective.

With our products, you can achieve strong, continuous full-body orgasms previously unattainable through conventional sexual techniques. These orgasms are so earth-shattering that they deserve a special nickname - The Super Orgasm, or as our enthusiasts prefer, The "Super-O." A Super-O is entirely different from a traditional penile orgasm - it is characterized by pleasure starting from the lower abdomen that will awash the entire body in a state of bliss.

A person does not ejaculate during a Super-O. This means there is no "recharging" or "time out" period needed. Through practice, you can have these orgasms, one after the other during sessions lasting for an hour or more at a time. Even short sessions can feel long as our customers have reported that during Super-O sessions their "beds shake uncontrollably" and they "lose all track and sense of time." Aneros products can also be used during traditional sexual encounters. During oral sex and traditional intercourse, when a person uses our products you will be harder, last longer, and have better control. The prostate will empty more fully during ejaculation, which means a more intense and satisfying orgasm. This increased sexual performance is a great secondary benefit for the partner as well. Aneros is a great way to explore and expand your intimacy with your partner.

While it takes practice to learn how to make these things work with one's body, they are amazing little devices, capable of producing extraordinary pleasure by stimulating "peristaltic" orgasms.

The Peridise, from the fine folks at Aneros, is meant to be used anally, much like their other toys. These ones however, are advertised as being for anyone: for people without prostates, as well as for people with prostates. As it happens, I do have a prostate, so my experience is reported from that point of view.

Design - The Peridise comes in either a set of two or a set of four. I have the set of two (which is all there was originally), but everything I say will apply to the four-pack as well, which just gives you two more that are slightly different sizes.

Each Peridise toy is about four inches long, with insertable length of about three and a half inches. The largest of the toys is a maximum of 7/8" wide; the smallest is just over 1/2" wide. There are three little bloops, with the largest at the top and the smaller ones toward the bottom. The toys are very, very smooth and should be easy to use for even the least experienced butt monkeys.

The handles, which keep them from going in too deep, fit right in between the cheeks, so the Peridise toys are comfortable for extended wear. Since these toys are so small, there isn't much to hold them in place, so you may need to push them back in from time to time. But it's also possible to "pull" them inside you just using your PC muscles.

The Peridise toys are made from hard plastic, the same material as many other Aneros toys. It's durable and easy to clean. One can sometimes get a small seam with these. I didn't have that problem with the Peridise, but I have with other Aneros products. The seam is easily be filed away, though, if need be.

Evaluation - What can one say about how the Peridise performs? It's a little plastic stick, basically. You stick it in your butt and hope for the best!

Seriously, this is definitely a case of "you get out of it what you put into it". If you haven't played with this sort of toy before, it will take time, and practice, before you figure out how to make it work with your body. But it's fun practice and definitely worth the time.

I have to say that I was somewhat skeptical about these when I first saw them. I've used other Aneros products with success, so I was intrigued. I was mostly thinking that the small size would make these nice and comfortable for occasional wear under clothing, while walking, or whatever. It wasn't until I stumbled across some material about them online that I realized their potential and tried using them in the way I'm about to describe. I was stunned. I'm familiar with and extremely fond of prostate orgasms. But, while the orgasms I get from these toys are in many ways similar, they are also different. Even more intense in some ways.

The Peridise comes with detailed instructions. But these are perhaps not as helpful as one might wish. You see a lot of questions online about how to use these things. But the idea is pretty simple. You use the toys to do Kegel exercises with your butt, which is generally good for you anyway.

If you've used the Aneros, or a similar toy, you know the drill. If not, then, once you have one of these inserted, you want to squeeze your PC muscles on it, like you're trying to stop a pee, but don't contract them all the way. Try to hold about half a squeeze. It is basically impossible for you to hold your muscles like that. So the muscles around your anus will involuntarily contract and release, over and over, as if they are fluttering. That causes the Peridise to move inside your rectum, gently massaging you internally, especially around your anal ring, where you just happen to have loads of nerve endings. So, unsurprisingly, it feels great.

But it's what happens next that is really cool. As your muscles contract around these toys, your rectum starts looking for something to grab onto so it can move it along through your bowels. That's more or less it's job, right? So it's wants to do its job. Eventually, it decides to grab onto the little bloops on the Peridise. When it does, it starts pushing and pulling on the toy, which means that you have started to have a series of peristaltic contractions.

To return to our story... As best I can figure, since your rectum really isn't having much luck moving this thing along, it really gets into it, and the contractions become more and more intense. And it just so happens that these are extremely pleasurable. Like out of this world pleasurable. The contractions feel very much like the contractions you have when you orgasm. Except they go on and on and on. I've had orgasms with these things that have lasted two or three minutes. And, as I said, they are different, even from prostate orgasms. They're "whole body", in the same way, but somehow deeper and, at the same time, gentler, if that makes any sense. It's like the greatest hug you ever had. Except someone is hugging your from inside. Yeah, I know that sounds weird and mystical. But that's how it is.

It takes time to learn how to do this. It didn't happen for me at first, even though I had, by that time, had a lot of experience with this kind of toy. The technique, as I've said, is much the same as with other Aneros toys, but the feeling is so different that I wasn't sure when I had it right and when I needed to change what I was doing. So don't expect too much too soon. As you gain experience, you'll get a feel for how hard to squeeze, and then you can even vary the pressure to control the pleasure. Who would've thought that? Aren't human bodies amazing?

What may be even more amazing is that, by increasing the blood flow to your anal region and gently massaging you there, the Peridise toys can actually help prevent hemorrhoids. I speak about this from experience. I used to have a lot of problems with hemorrhoids. As in: Go to the hospital because I was in so much pain and then have minor surgery to have a large blood clot removed from my anus. Since I've been using prostate toys on a regular basis, I haven't had a single hemorrhoid. It's been four or five years now since I've had anything other than the mildest problem, and I used to have serious problems about twice a year.

One of the things I love about this kind of toy is how it puts me in touch with my body. I've learned things about myself by using the Peridise. It turns out that I am capable of having the most amazing feelings in places where I didn't even know I had feelings. I'm looking forward to learning more about myself.

Why the different sizes? Especially when there is so little difference between them? They really do give different experiences. While it's hard to say for sure, I think the smaller ones maybe are more intense, though they take longer to "get going". Maybe that's because the rectum has to try even harder to grab onto the little ones. I don't know. But session I tend to start with the larger ones to warm up and then switch to the smaller one. The smaller one is also a bit harder to use. You have to know a little better what you are doing, and you have to be a bit more patient. 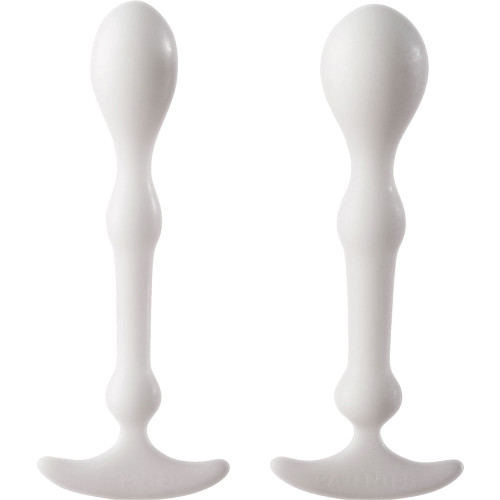